Boris de Beijer was originally trained as a jewellery designer at the Rietveld Academie in 2011. Since his graduation he has developed his practice in a multidisciplinary manner, without being held back by the boundaries of any specific discipline. In stead he manoeuvres freely in between, whereby his work sometimes tends towards sculpture, sometimes towards applied design.
Craftsmanship and antique techniques have always had a central position in his working methodes, but in stead of simply staying within tradition, he rather apllies these techniques in an unconventional manner. Sometimes even tending to go off the bend, and aiming to mislead the spectator. In his work form and function have an ambivalent status, often provoking questions regarding hierarchical structures within the contemporary art and design discours.

Since his graduation in 2011, Boris almost exclusively focused on working with synthetic, and non-traditional materials. He has managed to develop his very own visual language within his field. Comparable to the peculiar processes of the ancient alchemic's, he transforms relatively cheap and common resources, into new substances that strongly remind of higher valued materials, such as glass, minerlas and metals. This way of working adds to the alienating and almost otherworldly feel his work tends to provoke.

In 2020 Boris has come to a turning point in his career in which he is investigating different, and more traditional materials to work with. Working closely with expert glassblowers from Amsterdam he is working on a  ever growing series of glassware.

Boris has shown his work in both national and international galleries and cultural institutions, and has been included in various national collections such as Stedelijk Museum Amsterdam, The Coda Museum, and the MAD Museum in New York. He is currently represented by Side-gallery & La Romain Editions. Among the list of clients he worked for are brands like Jacquemus, Róhe Frames, Semaine, Cibone, and Ace&Tate. 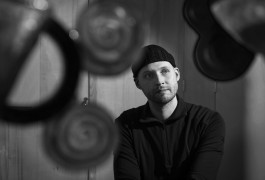